Standing outside, nude and bound, the chill in the air seemed to vanish as he heard her boots crackling through the snow.

The footsteps stopped in front of him. He kept his eyes downcast, focusing on her tall, black boots. When she showed him the cage, he knew he’d get no quarter tonight. 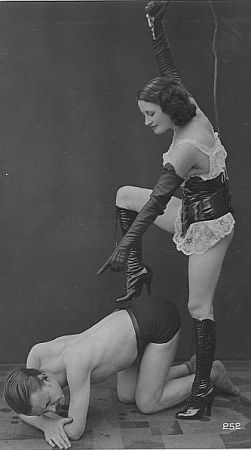 He squirmed as the cold metal of the cage touched his cock, but it did nothing to lessen his erection.  He sighed hearing the lock click.

“Good boy,” she purred at him and ran a gloved finger down his belly. “You’re not to cold are you?” She asked, tapping the bars of the cage, watching his cock swell within it.

He bit his lip and shook his head. “No, Mistress.” The soft leather of her gloves made him shiver. She dropped her hands, placing them back into the pockets of her coat. He wondered what she wore underneath it.

She walked slowly around him, pausing to brush her fingers over his flesh. All of her actions heightened his desire. He could feel her pause behind him, and her silent gaze made his skin prickle and his cock strained against the cage, making him ache. He knew what she wanted him to do.

He waited until she walked back around, her boots still crunching the snow.  He kept his eyes trained on those boots. The black leather length of them gripping the curve of her calves. The shiny leather cupped her knees and disappeared beneath her coat.

Her throaty laugh carried over the cold air. “Please? Please what, minx?” Her fingers teased his nipples, rolling them between her fingers. 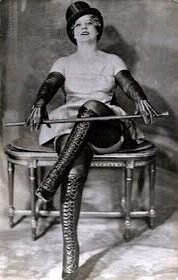 “Please, may I see your boots?”

She laughed again, her fingers once again tapping on the bars of his cage.  “You surprise me,” she replied, stepping back from him. She unbuttoned her coat slowly, deliberately delaying.

He watched as each button revealed more. The first gave him a glimpse of her bare skin, with its rich tawny glow.  The gap in the coat widened shadowing the already deep black cat suit.

He let out a delighted groan seeing the suit. He imagined what the leather would feel like.  How it would be smooth and warmed by her skin. How it would hide nothing of her, but would still be a barrier.

She dropped her coat to the ground and watched the hunger, the worship cross his face. She released his cock from its cage, watching it spring free and bounce toward his belly.  He whispered quietly. She him from his bounds, and she slowly massages his wrists, she can feel the chill of his skin even though her gloves.

He drops to his knees, pressing his face against her belly.  She strokes his hair, allowing him his loss of obedience. She’d punish him once they were out of the cold. “Come,” she snapped her fingers, “and carry my coat.”

He followed behind her, wearing his own small smile anticipating his punishment. 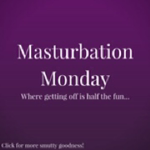 Thrill of the Chaste

The Life of Elliot…