In the Red Room

She felt a hand on her thigh, and knew that it didn’t belong to the man she was kissing. Fatima had been looking forward to the party in the Red Room all week. Now, she was naked, and already tongue kissing a beautiful man, while someone else was slowly stroking her thighs. It was, she decided, heaven.

“Would you like a woman?” Her partner asked, with his hands on her tits. She bit her lip and moaned as he began rubbing her nipples. She wasn’t sure if she answered. The man who’d been touching her thighs had joined them, and she opened her legs wider, wanting his hands on her pussy. His fingers entered her folds, finding her clit and rubbing in soft circles. She hadn’t even seen his face yet, and wasn’t sure she cared if she did. Once again, the red room was all about losing herself.  Giving into the pleasures she discovered here.

The man toying with her nipples dipped his head and began sucking on her tits, and she moaned. “Fuck me,” she whispered to the man with his fingers on her clit. He slipped his fingers into her pussy, pumping two then three fingers into her hot, wet depths. She’d been sure to lube up before entering the space.  She’d learned that after her third visit.  Sometimes her body just couldn’t keep up with what she needed, and tonight, she wanted something new.

The man finger fucking her continued, speeding up and slowing down as she asked. She glanced up and found a man watching her and her two partners. His cock was in his hand, and he stroked it as he watched her. “Fuck me, with your cock” she said to the man with his fingers in her pussy.  She shifted on the floor, moving on to all fours. The man sucking on her tits looked disappointed. “I want to suck you, while he fucks me” she said, still watching the man as he stroked himself.

Her partners seemed happy to give her what she wanted. She felt the man enter her from behind, and begin thrusting into her. She grunted and opened her mouth, taking the offered cock into her mouth.  She sucked at him, while the man behind her continued fucking her. He set a pace that matched what she’d asked for with his fingers.  He kept one hand on her hip, and the other reached around her finding her clit. He rubbed while he fucked, clearly intent on bringing her off. 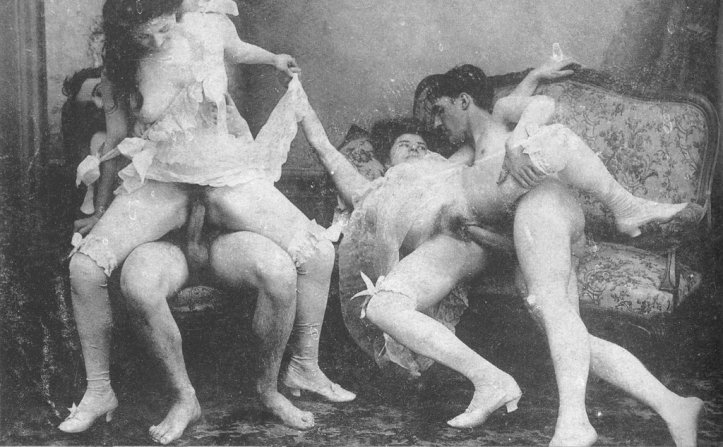 She moaned around the cock in her mouth and closed her eyes. She felt each man thrusting into her, and felt her body reacting, responding. The tingling in her belly, told her she was going to come. Her body shook as she came, and the man fucking her continued his rubbing unabated.

The cock in her mouth swelled and flooded her mouth the come. She swallowed quickly, still sucking as he pulled his cock from her mouth. Too soon after the man fucking her came, as well. Another man took his place, touching her hip, and she nodded. “Yes, fuck me.” She moaned, still wanting more.

The second cock filled her, and she looked for the man who’d been watching.  He stepped up to her, his cock in hand.  He offered it to her, and she opened her mouth to receive it. As these two new partners, began thrusting, one in as the other slid out, she felt herself give in, give over to her desires. It would be hours of fucking and sucking before she would leave the Red Room.