Kate opened the package.  She expected her latest paperback book order, but instead she found an antique book, carefully wrapped in paper and cloth, both crumbling a little at her touch.  She turned back the package, wondering where the book had come from.  Her little book store specialized in genre fiction, the kind of paperbacks people took on planes and to the beach.  She didn’t deal in old books.  The package bore her name and address on a handwritten label.  The return address label was illegible in both handwriting and being half covered with stamps and notations from the post office.  This package had seen some adventures getting to her.

Deciding there was nothing else she could so, and being curious, she carefully unwrapped the book.  The cover was plain, green with the words “Diary” followed by the year “1926” printed in black.  She set the book down, and searched the packing material for an invoice or note.  There was nothing.  Picking up the book, she flipped to the first page.  The name Lillian was written in the upper corner.  The paper felt strangely slick under her fingers and she flipped to the next page.

Kate was engaged in an entry, about Lillian and a starlet of some repute. Lillian had scrawled something in the margins. Kate turned the book, trying to decipher it.  She murmured the words out loud to herself, but they sounded like gibberish.  She repeated the sounds and syllabus, but still couldn’t make sense of the words.  She was going to give up on the note and get back into the entry, when she heard music.

She looked up from the diary, expecting to see the familiar scene of her shop.  Instead of the familiar bookshelves, she saw a bedroom – an art deco bedroom. Before she could react, the door erupted with a flurry of beautiful women wearing, what to Kate seemed to be museum quality, flapper costumes.

“Oh doll, you can’t wear that,” a young blond woman said.  They descended on her, changing her clothes, and exclaiming over her underwear.  Of course the almost sheer silk sheath dress couldn’t be worn with a modern bra, and wasn’t designed for any underclothes at all. 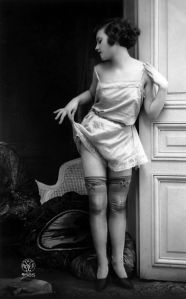 She’d never felt real silk over bare skin before, and it was both heavenly and tortuous. The constant soft rustle of the silk on her lower back, as the dress was nearly backless, and swish over her thighs was delightful; however the nonstop stimulation of her nipples had her damp. And worse the dress was so thin that everyone could see her nipples.

None of the woman seemed to care. They chatted and applied makeup. Two even offered to help her apply makeup.

They were all interrupted by the entry of a striking woman with long dark hair.  The woman hushed their chatting.  “Hello Madam Lillian” they said.

Kate blinked, Lillian was the woman who written the journal. “Lillian?” Kate murmured. The medium turned toward Kate, and when their eyes met, Kate felt it. There was a jolt, what she’d always considered to be a cliché, but here it was. She was drawn to the woman, and Kate could feel the woman’s interest in her.

“Girls,” Lillian said to the other women, “Why don’t you start mingling with the guests.” Her dark eyes landed on Kate, “But not you.”

The other women left the dressing room, clearly excited to start the party.

Kate wasn’t sure what to say.  She couldn’t explain how she’d arrived at the party she was crashing.  She wasn’t even willing to let herself think about where she was and how she got there.

“You read my book,” Lillian’s voice was commanding.

Kate felt herself nod.  “I got it by mistake, and read it.” She blushed thinking about the graphic stories she’d read in the book. “I don’t know what I’m doing here.”

Lillian stepped closer to her.  “If you have it, you are meant to.” She touched Kate’s cheek, and Kate bit her lip. “You know about my parties?”

Kate watched the woman’s lips, painted in a perfect cupid’s bow, moving wondering what it would feel like to kiss her – then wondering what had come over her to be so distracted. “Yea, yes” Kate nodded, her voice weak.

Lillian’s eyes traveled over Kate’s dress, smiling at her erect nipples. “I think you’d like to be part of the party.”  She met Kate’s eyes.  “You are welcome to walk through the door and join our revels,” her hand stroked Kate’s arm and Kate shivered. “Or, you can stay here until the end of the party when I will be free to send you home.”

Lillian smiled and took her hand.  She led Kate to the mirrored vanity and dug through the tangle of jewelry. She slipped a long strand of faux pearls around her neck.  The necklace hung to her waist. Lillian leaned forward and kissed her, softly on the mouth.  “Go, enjoy the revels.”

Kate blinked at the woman, her knees feeling weak. Lillian led her to the door, and Kate stepped out into the party. She stood by the door a moment, trying to get her brain to process what she was seeing.  There was a band on stage, musicians playing jazz and a lively group of dancers.  Some clothed, some in various states of undress.  There were couples and groups chatting casually with one another seated on gorgeous velvet sofas. While across the room, on similar sofas, couples and groups were well into the orgy phase of the party.   She watched a nude woman seat on the bar, slowly inserting a bottle into her pussy.

While Kate watched, opened mouthed, she felt a hand brush her back, and a male voice in her ear, “You can join her if you want.”

Kate shivered, wondering if she could join the woman in her wanton display.  She watched the small audience cheer the woman at the bar on as the bottle inched in further.

“You can join us,” the man whispered in her ear, turning her from the display at the bar to a small side nook, with a large sofa already holding two men.  Kate knew he was inviting her to fuck them all, and she wondered if they would want her one at a time, or all together.

His hand was warm on her back, and she nodded.  “I’d like that.”  She walked over to the waiting men.  She thought she recognized them from black and white movies, but wasn’t sure. She felt the first man still behind her. He reached around her and cupped her tits through the dress. She leaned back against him, her eyes trained on the men watching.

His hands had no trouble finding and foundling her hard nipples. She moaned feeling the rush of heat travel from her nipples to her pussy. He pinched her nipples and she moaned again, “Yes, more.”

“Will you take your dress off?” he asked her.

She nodded frantically, wanting his hands on her. She stepped away from him, and slipped the straps down on the dress, letting it pool around her feet. She stood nude, except for the string of beads around her neck.  She stood a moment, and walked toward the men on the couch.  The beads swung heavily against her naked skin.

The men stood, letting her sit on the sofa. She sat, feeling the velvet on her bare skin.  She inched forward, and spread her legs wide. The beads brushed against her clit in this position. “Well?” she looked at the three of them.

“You were watching that woman fucking the bottle,” One of the men said. “Do you like big cocks?” he asked.

He laughed at her answer, and she felt the man withdraw his fingers.  “Shall we cut the cards for our turn?”

Kate felt a frisson of desire. This was happening and something about the idea of a chance card deciding who fucked her had her panting.  “Yes,” she said, “cut the cards.” She rubbed the beads over her clit, while the man fumbled a deck of cards from the table.  His eyes never left her pussy. They shuffled and drew their cards. One man, the only blond cheered. The others shrugged and watched her.

The blond unbuttoned his pants, and Kate watched his cock spring free. Without much ado he climbed on top of her, and his cock slid inside.  Kate moaned in delight as he filled her.  He fucked without finesse.  He pounded into her, in what she could only think of as a rutting. His heavy breathing told her he was about to come. She gave a disappointed whimper as he pulled out his softening cock. Before the next man stepped up, she shifted on the couch.  She bent over the arm of the sofa, her knees resting on the seat.  Her tits hung free over the edge. “Who’s next?” She asked looking at the two men.

The man who’d invited her over stepped up, positioning himself behind her.  She moaned contently as he slid his cock inside her, and she thrust back at him. She felt his cock sliding in and out, and reached for her clit.  She rubbed frantically, wanting to come before this man was finished. She noticed that the blond had left the nook, and for a moment, the idea that he had fucked her and just walked away overwhelmed her and she came hard and loud. Her body shook and she let her fingers rest on the velvet.

The man fucking her didn’t last much longer. He finished with a loud cry of his own. The last man stepped up to replace him.

Kate looked back, over her shoulder at him, and smiled. He didn’t need any more prompting, and rather like the first man, began rutting, pounding hard and fast into her. Kate moaned and cried out, loving the sensations flooding her.  The man who’d invited her to their corner of the party, refastened his pants, and knelt next to her, tugging on her nipples.

She growled her encouragement at him, and she felt another orgasm building.  But she didn’t think the man fucking her would last until she came.

The blond man returned with a handful of men in tow.  “Care to take them on too?” He asked her.

She eyed them, noting that they were far less hesitant than her current partners.  She guessed they were experienced at debauchment. But the ideas of what they might do overcame her, and she nodded. “Oh my stars, yes.” She panted as the man fucking her picked up speed. “Why don’t you gentleman cut the cards.”