Many people don’t know this, but Thomas Alva Edison, the light bulb guy, also claimed to have been working on, what can only be colloquially called, a ghost telephone. Historians all seem to agree that no evidence that he did more than talk about the idea exist. There are no plans, no prototype has even been found, and no patent filed.

I was in my final year getting my engineering degree when I had an opportunity to clear out some ancient filing cabinets in my department. Since the job included a small stipend, I jumped at the chance. The work was tedious, at least it was until I found the plans. Yes, I’m saying I found the plans for Edison’s ghost phone. The convoluted chain of evidence that lead to the materials being located in this particular file cabinet aren’t really the issue – So I did what any engineer would do, I took them home.

I built the telephone. I admit there were some elements that didn’t make sense to me, some arcane symbols etched into the metal and a lot of wires that had to be configured to make very specific shapes. Once it was done, I celebrated. I didn’t really think it would work; I mean, come on, a ghost phone?

I sat in my tiny apartment, sweltering in the summer heat wearing a tank top and panties finishing off a bottle of cold white wine. I must have been just the right side of tipsy to decide to try calling someone. I wasn’t sure exactly when phones stopped relying on switchboard operators, but Edison’s design included a rotatory dial; granted, it lacked numbers and had a series of occult symbols etched into the plate. I picked up the ear piece and listened.

It was almost like listening to a sea shell, almost. It had that same whooshing sound, but I could swear that I did hear voices, like when my upstairs neighbor had his T.V. too loud. I chose a couple of symbols at random and dialed. I didn’t expect anything. I listened to the clicking of the dial, proud that I seem to have constructed it correctly. The background noise shifted, and now I was sure I heard voices. I almost dropped the phone, when the eerie wails started.

“Hello?” a sonorous voice came through the ear piece.

“Um Hello?” I managed to sputter.

“Who are you trying to reach?” the voice asked. He, I think it was a he, had an accent. Something may be vaguely British? Or perhaps Southern US?

“Is this a ghost?” My voice squeaked. If I hadn’t built the device myself, I’d be convinced someone was just messing with me. But I had built it, and I knew that it was supposed to be connecting to the æther, whatever that meant; I just hadn’t thought the æther was a real thing.

The voice laughed a mellifluous sound that made me shiver. “Oh you have reached the wrong plane. There’s nothing human on this plane.”

I stumbled for an answer, when I heard a sound behind me. It sounded like birds all taking flight or a windstorm or a rush of waves, or maybe all of those things.

I turned, still holding the phone, and saw him. He stood over six feet tall and was pale, like milk white. He was bald, whether it was natural or not I didn’t know. There was something off about his proportions. His limbs seemed too long. He was wearing what looked like a cross between a priest’s robe and something one might wear at a fetish club. And his face was covered by a network of fine scars, not from injury but something that looked intentional. But it was his eyes that drew me. There were black, like no sclera just inky, mind warping darkness. I think I dropped the phone then.

His voice seemed to echo in my head. I couldn’t think of anything to answer with. My head felt like it was buzzing.

“What interesting ideas in this brain of yours” he said taking a step toward me. His hand brushed my hair back. “You have such wicked thoughts.” He smiled, revealing a mouth full of jagged shark teeth. Before I could step back, his hand grabbed my throat. He didn’t strangle me, just held me in place. “This thought,” he said, his thumb caressing my jugular.

“Please,” I said weakly, but I wasn’t sure what I was asking for.

“You think of this,” he said moving his face closer to mine. “You dream of this.” He squeezed my throat a little.

“I know all of your naughty, nasty thoughts,” he said and leaned forward to whisper in my ear. He related a litany of my darkest fantasies in tantalizing, terrifying detail. He finished his recitation and ran his tongue from my ear down my face.

I shivered, but couldn’t remember a time when I’d been this turned on. My panties were soaked, and my nipples were so hard they ached. “How do you know?”

He let his eyes drop to the phone on the floor. “You didn’t reach the ghost plane, human.” He met my gaze, “I chose this form for you.”

I suddenly recognized him. He looked like a horror movie character that I still fantasized about. It wasn’t an exact copy, but it gave the same feeling. “What are you?”

He laughed again, and once more the sound flooded me. “You don’t want to know.” He tightened his grip on my throat. “Now, we play.”

I found myself nodding, well as much as I could with his hand around my throat. “Yes, please.”

“Stand” he ordered. I managed to scramble to my feet, and he never removed his hand from my throat. His free hand tore my panties away. I gasped as his cold hand slipped between my legs. And he was cold, just a few degrees above ice. His fingers roughly cut through my wetness, ignoring my throbbing clit to plunge inside me. The palm of his hand pressed into my clit as he pounded his fingers inside me. I whimpered as the chill fought my own heat. But he did know exactly what I had dreamed of.

I think my moans made him smile, maybe just a quirk of his lips. And thinking of his lips, he leaned forward and kissed me. His tongue, as cold as the rest of him, invaded my mouth. My own tongue grazed his teeth, tearing it. I tasted my blood in his mouth. And I heard him moan.

His hand tightened on my throat, and I was already breathless from his kiss. I knew this moment. The blackness starting at the edges of my vision, and I gasped for the tiny bit of air still available to me. This was the moment. His fingers continued their assault, and I knew that I was going to come. I was out of air, and the darkness grew. My vision narrowed to his eyes, his already black eyes. The orgasm shattered through me. I felt a rush of wetness down my thighs, as I closed my eyes. My air was gone and my body shuddering from both orgasm and asphyxia. My knees went limp, and he pulled his hand from my pussy wrapping an arm around my waist holding me up. I was pressed against the icy length of him, and he released my neck.

I inhaled violently, feeling the air burn my abused throat. After a few huge breaths, he bent me over the arm of the couch. He moved me like I was a doll, and I loved it. My mind was still fuzzy, but I knew what he was going to do. I knew because he was rummaging around my fantasies. 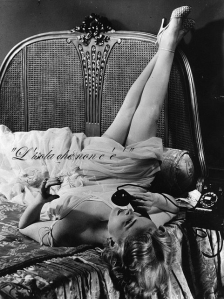 His hand collected my hair, pulling my head back. My eyes teared up, “yes,” I murmured, “oh yes.” He kept my hair pulled tight; the position of my neck restricting, but not cutting off my breathing. Oh he was so cold, and so big. His fingers dug into my hip, bruising me. I whimpered and growled as he used my body. My hands clawed at the couch cushions, wanting to touch him, wanting to move, to writhe, to plead. My position prevented any of those options. So I whimpered and closed my eyes, savoring it all.

His fingers ceased digging into my hip and found my clit. With the same brutal efficiency as before he set him fingers to work. There was nothing tender about his touch, but it was exactly what I wanted. Hard fingers ground into my clit, and I squealed my orgasm. I felt his gelid come fill my bowels, and he released my hair. I let me head slump forward, resting on the couch.

I felt him shift away from me, but my legs were too weak for me to rise. I turned my head and watched him stare at me a moment, his inky eyes unreadable. He collected the ghost phone, setting it back on the coffee table. I suddenly understood what he was doing, “don’t.” I started, but he hung up the phone and was gone.